Recently, two studies were done to test the spatial memory of cattle. 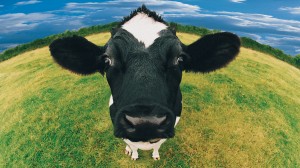 In one study, six heifers were trained in mazes.  The mazes were radial and parallel arm mazes in two levels of difficulty.  Grain was placed at the end of each maze then the heifers were individually released and allowed to choose their route freely until all the grain was gone.

When a heifer entered a previously entered arm, the choice was considered incorrect. When they tried the four arm level, the average of correct choices in the first four tries were 3.83 and 3.6 for the radial and parallel mazes, respectively. When they were put in at the eight arm level, the average correct choices in the first eight tries were 7.78 and 7.36, respectively. This shows that the heifers were a little more efficient in the radial maze where directional and distal cues were more pronounced.