On the very first Saturday of the Minnesota State Fair, 18-year-old Tyler Otte’s champ Angus beef cattle made him $5,600.

That’s the price the Angus sold for in Saturday’s 4-H Purple Ribbon Auction, $1,400 more than the average in 2014’s public auction, according to fair authorities.

The mid-day prior to the public auction, Otte remained in the livestock barn brushing his Black Angus, and he was far from alone. Young adults from throughout the state were preparing their animals for the auction the following day.

The Purple Ribbon Auction occurs each year at the Minnesota State Exhibition. 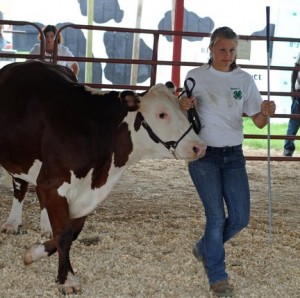 “It originated as an extra incentive for kids to participate in the fair activities”, stated 4-H volunteer Corky Modene, that raised animals for the 4-H auction himself in his more youthful years.

To get to the auction, young adults spend the year raising livestock and needs to win county fair competitions to get to the fair.

The auction makes big amounts of cash from purchasers. Kailey Davis of Freeborn County, who raised the champion of the 2010 Grand Champion Market Beef category– the one in which Otte competed– made $14,600. Eighty percent of auction profits go to the young people who raise the animals, while 20 percent, according to Modene, goes to 4-H scholarships and other curricula.

This will be Otte’s third year participating in the Purple Ribbon Auction, so he is no stranger to the process. Otte’s family has been raising cattle since he was in the second grade. “We keep buying them, so we keep raising them,” he claimed, casually.

Daily care throughout the year is the largest commitment when raising cattle for the public auction, Otte said. “You have to wash (bathe) them on a daily basis,” Otte claimed.

And the cattle call for unique, expensive feed, he said.

Bonnie Reed, a member of the 4-H Auction Committee whose kids used to join the auction too, claimed: “It takes hours a day to deal with them.”.

Another commitment in raising cattle is the issue of space to accommodate the animals; but Otte said that it wasn’t a problem for his family. “We live way in southern Dakota County, so it’s fine,” Otte said.

When asked about his feelings about raising cattle for massacre, Otte claimed that it’s not difficult to give them up at the end of the auction. “That could seem rough. But it’s what an animal is, I guess,” he stated, and also shrugged.

Although Otte is not really connected to the cattle he raises, he is to the people he meets at the auction.

“You meet a lot of awesome individuals”, Otte stated. “You meet people from all over the state. We keep in touch.”

Otte considers visiting the University of Minnesota next year with a bunch of the people he has met via the 4-H auction.