Cattle handling is a dangerous task on milk farms, and cows are a significant reason for injuries to animal trainers. Even if milk cows are usually tranquil and docile, when situations happen that they perceive or remember as averse, they might come to be perturbed and harmful to take care of.

This research study intended to compare human-animal communications, cow habits, and trainer safety when relocating cows to day-to-day milking and relocating cows to much more seldom happenings, and also possibly hoof trimming. These procedures were noted on 12 Swedish commercial dairy ranches. The research study included behavioral observations of trainer and cows and cow heart rate recordings, along with tape-recording regularities of situations and also occurrences related to a boosted injury danger to the trainer. 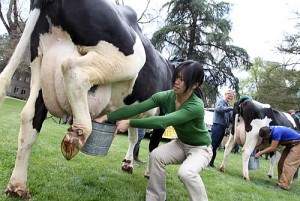 At milking, cows were quite quickly moved making use of couple of communications. As anticipated, the cows showed no behavioral indicators of stress, anxiety, or resistance and their heart rate only rose somewhat from the baseline (i.e., the typical heart rate during an uninterrupted duration before managing). Moving cows to hoof trimming involved more strong and gentle interactions compared to relocating cows to milking. In addition, the cows showed considerably greater frequencies of actions a measure of hostility and worry (e.g., freezing, stopping, and also resistance), and a greater rise in heart rate.

The threat of injury to which handlers were subjected additionally boosted when relocating cows to hoof trimming as opposed to routine milking. Some interactions (such as strong tactile interactions with an item and pulling a neck strap or halter) appeared to be connected to possibly dangerous incidents where the handler was being kicked, head-butted, or run over by a cow.